A Focus on Students with Disabilities
December 2009

In this report, we look at the freshman year course performance of Chicago Public Schools (CPS) students who receive special education services and ask whether grades, course failures, absences, and on-track status are useful for identifying students who are at risk of dropping out. We also examine how academic behaviors, such as attendance and study habits, affect course failures and grades of students with disabilities.

This report found that freshman year course performance—more than background characteristics such as race, gender, socioeconomic status or prior achievement—predicts which students with disabilities are most at risk for dropping out of high school.

The report, a joint effort of the UChicago Consortium and the National High School Center, found that absences, course failures, course credits and GPA all can be used to accurately predict whether ninth-graders with disabilities will graduate from high school.

The new report builds on previous studies of the Freshman OnTrack metric, which showed that students who accumulate at least five semester-long credits and fail no more than one core course during their freshman year were nearly four times as likely to graduate. Consortium researchers incorporated those measures into an on-track indicator, adopted by CPS and other urban districts as part of their accountability systems, which proved more helpful in predicting graduation rates than either background characteristics or previous achievement.

The report demonstrates that the Freshman OnTrack indicator can be applied to the special education population as well. Students with disabilities who are “on-track” are three- to six-times more likely to graduate than their off-track counterparts, according to the report. 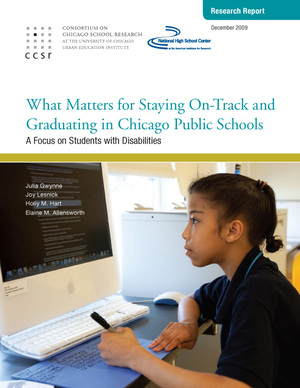 What Matters for Staying On-Track and Graduating in Chicago Public Schools: A Focus on Students with Disabilities
Press Release 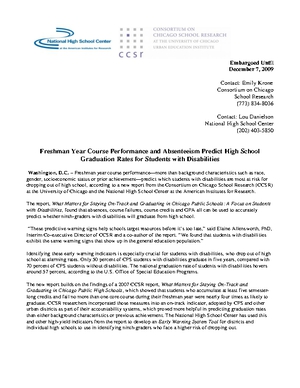