A Focus on English Language Learners
May 2012

NORC at the University of Chicago

1. Are ninth-grade course performance indicators as predictive of graduation for ELLs as for the general population?

This report builds on findings from earlier Consortium reports to examine whether ninth-grade early warning indicators that are used to determine if students are on-track to graduate high school—such as absences, grade point average (GPA), and course failures—are as predictive of graduation for high school ELLs as they are for the general student population. It finds that course performance indicators are highly predictive of graduation for ELL students, and are actually more predictive than other ELL-specific indicators, including English language proficiency level and whether students experienced interruptions in their education.

The report, supported by the National High School Center at the American Institutes for Research, concentrates primarily on Hispanic students because they represent the largest group of ninth grade ELLs in CPS, although, the same analyses of course performance and graduation are also reported for white and Asian students. Nationally, ELL students are the fasted growing student demographic group, representing 10.8 of the pre-K-12 population in the United States. The challenges ELL students face in learning a new language while also mastering course content are reflected in their academic performance in high school, where ELLs students tend to have lower grade point averages and be more at risk of dropping out than their non-ELL peers.

A number of the report’s key findings highlight the diverse needs of ELL students. First, Latino students who entered CPS as ELLs and obtained English language proficiency before sixth grade performed better in their ninth-grade courses compared to other Latino sub-groups.  Second, only 52 percent of Latino ELLs who had been enrolled in CPS since elementary school and had not achieved proficiency when they entered high school graduated within four years.  The report also finds that Latino ELLs who were new to CPS in the middle or high school grades and entered ninth grade as ELLs performed as well or better than any other group in their freshman class, but they graduated at lower rates than most groups. Latino, White, and Asian students had similar patterns of course performance and graduation rates, however, Latino students, regardless of ELL status, graduated from high school at far lower rates than White and Asian ELL students.In addition, the report finds that ELL students who were newcomers to CPS after age 12 were less likely to graduate than other students with the same grades and attendance.

The report focuses on a cohort of CPS students who were in ninth grade in 2004-05, and follows them for five years, until 2009, when they should have graduated. Researchers looked at the performance of ELL vs. non-ELL students in CPS, and also compared several ELL Hispanic subgroups to each other.

Click below to view a webinar offered by the National High School Center and the Consortium on July 11, 2012, to discuss the findings and implications of the report. 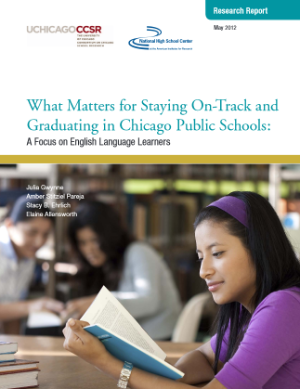 What Matters for Staying On-Track and Graduating in Chicago Public Schools: A Focus on English Language Learners
Press Release 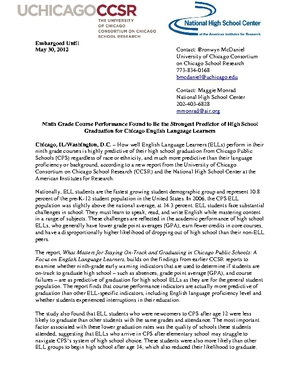 What Matters for Staying On-Track and Graduating in Chicago Public Schools: A Focus on English Language Learners