Relationships with Learning Outcomes and Reasons for Absences
September 2013

NORC at the University of Chicago

1. What is the extent of absenteeism among preschool students?

2. Is preschool attendance tied to students’ academic success---both in preschool and beyond?

3. Why are students absent from preschool?

This report highlights the critical importance of consistent preschool attendance. Students who attend preschool regularly are significantly more likely than chronically absent preschoolers to be ready for kindergarten and to attend school regularly in later grades, the report finds.

“The significance of this research extends well beyond Chicago. People tend to think of attendance as a middle and high school problem, but this study demonstrates conclusively that attendance matters as early as pre-kindergarten,” said Hedy Chang, director of Attendance Works, a national initiative to promote better policy and practice around attendance. “We keep talking about the value of early education, but it’s only valuable if children show up regularly so they get the most out of the enriched learning experience.”

The study, which follows 25,000 three- and four-year-olds served by Chicago Public Schools (CPS) school-based preschool programs, finds that chronic absenteeism is rampant among preschoolers in Chicago. In 2011-2012, almost half of three-year-olds and more than one-third of four-year-olds were chronically absent, meaning they missed at least 10 percent of the school year.

Key findings from the report include:

“These findings are challenging because chronic absenteeism is so prevalent and the reasons preschoolers miss school are so diverse,” said report co-author Stacy Ehrlich. “However, there is also a clear opportunity to engage families and communities by addressing the issues that contribute to chronic absenteeism in preschool. Improving preschool attendance will require a student-by-student, family-by-family, school-by-school approach.”

A technical appendix for this report can be found here.

This report is the result of a collaboration between the UChicago Consortium and the Office of Early Childhood Education at Chicago Public Schools.  It was generously funded by the McCormick Foundation.

Absenteeism from Preschool to High School - This PowerPoint is accompanied by a 37-minute audio presentation on attendance across several UChicago Consortium projects.  To play the presentation, simply start the slideshow.  Slides will change automatically. 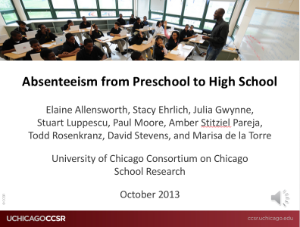 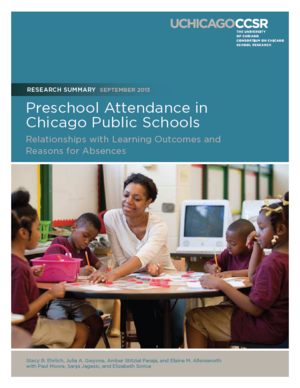 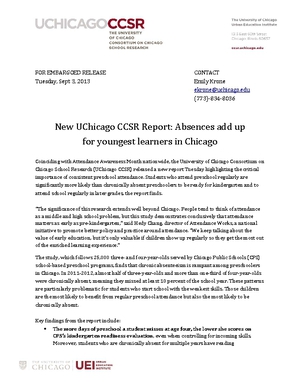 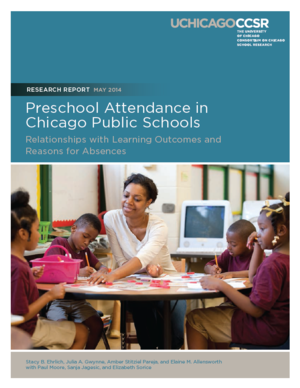 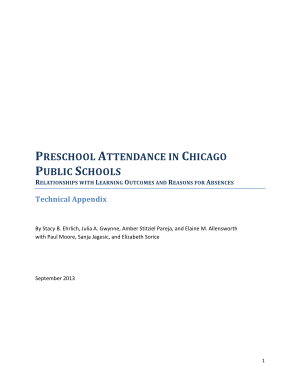