3. What happened in the second year for those students who were retained in third and sixth grades?

4. What happened to eighth-graders who were retained or attended transition centers?

Passing Rates and ITBS Achievements Trends Before and After the Policy

1. How many students were at risk under the policy?

2. Were more sixth-graders meeting the cutoff in 1997 than before the policy?

3. Did Summer Bridge raise the proportion of students who met the promotional cutoffs?

4. How many more students met the cutoff?

6. To what extent were 1998 passing rates for third- and sixth-graders better?

7. What were the ITBS achievement trends among students who met the test criterian in May?

8. What were the ITBS achievement trends for sixth-graders in 1995 who were socially promoted?

9. Did Summer Bridge pay off?

10. How did retained and waived students progress?

11. What were the results for third-graders?

1. How did ethnic Differences impact third-, sixth-, and eighth-graders under the policy?

2. Were there gender differences?

In 1996, the Chicago Public Schools implemented a policy designed to end social promotion and raise academic achievement. The centerpiece of this initiative is a set of promotional test-score cutoffs for third-, sixth-, and eighth-graders. Students in these grades must achieve a minimum score on the Iowa Tests of Basic Skills (ITBS) in reading and mathematics in order to be promoted to the next grade.

Students who do not meet the criteria are required to participate in a special summer school program, Summer Bridge, and retake the test at the end of the summer. Those who fail again are either retained in their grade, promoted nonetheless, or, if they are 15, sent to new alternative schools called Transition Centers. Because this policy's impact has been both far-reaching and controversial, the Consortium on School Research has embarked on a study to identify the ways in which it has affected student achievement and school instruction. This first report from the study compares the progress of students who faced the promotional test cutoffs in 1997 and 1998 with that of a group of students two years earlier, before the policy was in place. The main findings of this first report are the following: 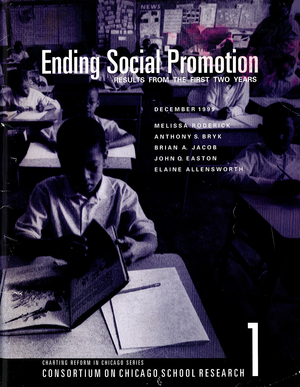 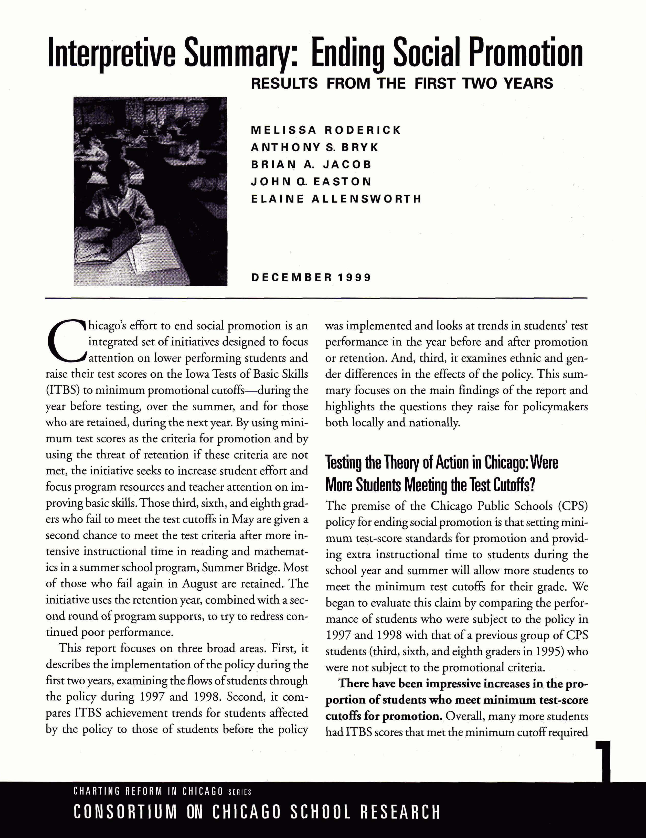