From High School to the Future

1. What previous test score trajectories lead to an ACT score of 20?

This research report points to a “major misalignment” between the standards set by the state ISAT tests in elementary school and the college-readiness standards expected of all juniors in Illinois high schools as measured by the ACT, which is part of the state’s PSAE exams. The report finds that it takes a score well into the "Exceeds Standards" category on the eighth-grade ISAT to have a  good shot at scoring well on the ACT in eleventh grade.

The study was inspired by a new goal in Chicago Public Schools (CPS) to have their juniors reach a goal of 20 or above on the ACT. It was based on a longitudinal analysis of more than 40,000 students from three junior classes (2005, 2006, and 2007) in CPS. An ACT score of 20 is actually lower than the state average and college-readiness benchmarks set by ACT, but was seen as a realistic goal for Chicago students because graduates with this score or better have a good chance of being accepted into Illinois state universities.

To understand the pathway to 20, researchers also tracked back from the ACT to see students’ progress on prior tests. In addition to the ACT, all CPS high school students also take two other tests developed by ACT. These tests, the EXPLORE and PLAN, along with the ACT, make up EPAS—the Education Planning and Assessment System. The EPAS system is now used widely in other Illinois high schools. The authors also point out that students need good grades and high schools with strong academic cultures to keep from “treading water.” To understand those school experiences, the report also builds on key findings revealed in recent Consortium research that has delved deeply into other factors that influence students’ success in high school and their college readiness. 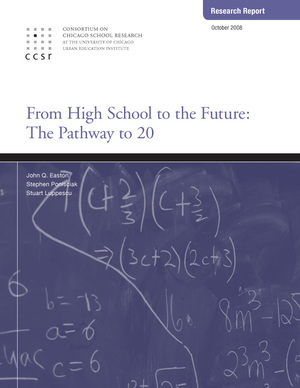 From High School to the Future: The Pathway to 20
Press Release 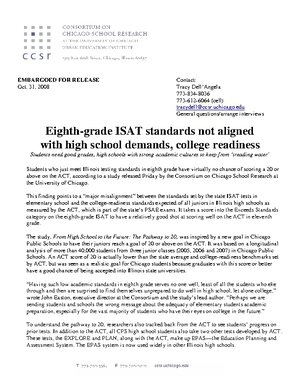 From High School to the Future: The Pathway to 20