Changes in GPA across the Transition to High School
October 2018

1. How did CPS students' grades decline during the transition to high school?

2. How does GPA decline in arts and PE/health grades in addition to grades in core subject areas?

3. How do declines in GPA break down by race/ethnicity, gender, and eighth-grade achievement?

4. How do declines in GPA vary across schools?

5. What is the relationship between failures in ninth-grade core and non-core courses, credit accumulation, and high school graduation?

This report builds on prior Consortium research on GPA loss across the transition from eighth to ninth grade. It explores how CPS students’ grades declined during the transition to high school in more detail, and considers how both eighth- and ninth-grade grades have changed since the original report was written. It examines GPA declines in arts and PE/health grades, in addition to grades in the core subject areas, and breaks down these declines by race/ethnicity, gender, and eighth-grade achievement, and looks at how these patterns vary across schools. It also explores the relationships between failures in ninth-grade core and non-core courses, credit accumulation, and high school graduation.

All CPS students are at risk of seeing significant declines in GPAs in core courses in the transition to high school, even students with strong eighth grade grades and test scores. Fewer than half of students who earned a 3.0 in eighth grade earned a 3.0 in ninth grade, and the core GPAs of high-achieving Black students fell twice as much as those of their White and Asian peers. Students at nearly all CPS high schools saw signiﬁcant declines in PE/Health and arts grades between the eighth and ninth grades. Black and Latino male students also saw significant grade declines on average in the non-core subject areas. The arts grades of Black young men fell by more than three-quarters of a point between the eighth and ninth grades, and their PE/health grades fell a full point.

Over the past decade, CPS high schools have made significant progress in reducing core failures in ninth grade by closely monitoring students’ progress in their core courses to ensure that they are receiving appropriate interventions and supports, and these efforts have resulted in large gains in Freshman OnTrack and high school graduation rates. However, from 2012 to 2017, students’ grades continued to decline in all subject areas between the eighth and ninth grades, including non-core subjects like arts and PE/health. Ninth-graders who earned high grades in the middle grades may not be at risk of falling off-track, but large declines in their overall GPAs between the eighth and ninth grades do have consequences for their access to selective colleges and their likelihood of earning a four-year degree. 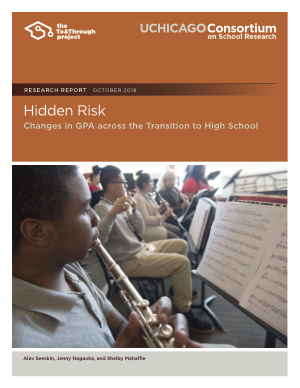 Hidden Risk: Changes in GPA across the Transition to High School
Press Release 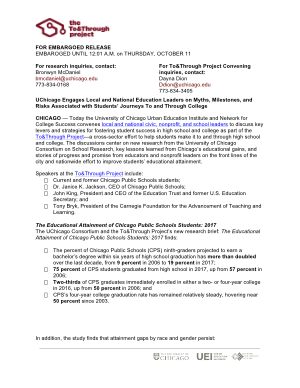 2018 To & Through Press Release
Figures & Tables 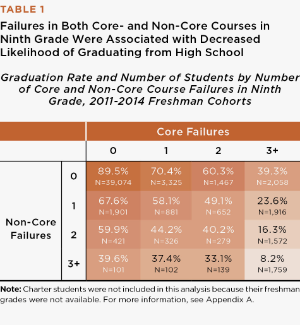 Hidden Risk: Changes in GPA across the Transition to High School