Findings from an Investigation into the Culture of Calm Initiative

1. How was the initiative implemented? What strategies were used, and what roadblocks existed in implementing the strategies?

2. What were the perceived effects of the initiative from the perspective of coordinators, principals, vendors,

3. Have student and teacher perceptions about their school’s climate changed more since the introduction of CoC than the perceptions of similar students in similar non-CoC schools?

Since 2010, CPS has focused resources on schools in order to improve school climate—particularly school safety. These resources were used, to a large extent, to hire vendors that provided services to teachers and students in 47 high schools in Chicago.

This memo will provide information to CPS about the perspectives of principals, coordinators, vendors, students, and teachers in the Culture of Calm schools. Data from a web survey of principals and coordinators, focus groups of vendors, and student and teacher surveys were analyzed to examine possible effects of the initiative.

Coordinators, principals, and vendors generally perceived their efforts in schools as positive. Most reported that, as a result of the initiative, school climate improved.

Although student reports of safety did not improve at a faster rate in Culture of Calm schools compared to other similar high schools, teachers’ reports of a safe environment, marked by less crime and disorder improved at a significantly faster rate than in other schools. 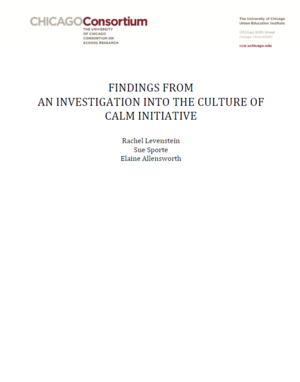 Findings from an Investigation into the Culture of Calm Initiative