Trends in Access to Computing Technology and Its Use in Chicago Public Schools, 2001-2005

Five years after Consortium research revealed a “digital divide” among Chicago Public Schools and limited computer usage by staff and students, this new study shows that district schools have overcome many of these obstacles, particularly in terms of technology access and use among teachers and administrators. However, technology is not yet a routine component of most students’ schoolwork. Using surveys of students, teachers and principals from 2001 to 2005, the report shows how technology integration in CPS schools has changed over time.

Technology initiatives that occurred in the 2001–02 school year seem to have been successful at moving schools forward in their capacity for computing technology, particularly in terms of gaining access to the Internet and making computers more easily accessible to teachers. However, these improvements slowed from 2003 to 2005. Principals noted increasing problems with computers breaking down after 2003—an indication that the hardware brought into the schools in 2001 was aging. After the 2001 initiatives, hardware and access issues were replaced with professional development issues as the biggest barriers to technology integration in the schools. Principals also noted less support for technology integration from the central office.

While the 2001–03 initiatives greatly improved computer and Internet access for teachers and principals, students’ access to computers at their school just kept pace with demand. The majority of Chicago students are mostly using computers for school assignments that involve word processing and Internet research, and are doing these basic computing tasks infrequently. Many students are not gaining any experience using computers for graphing, data analysis, or creating presentations. Moving forward, the surveys suggest three main areas of concern; the degree to which students have ready access to networked computers, the degree to which teachers receive professional development around regular integration of technology in coursework, and the degree to which teachers incorporate a variety of computing skills in their course assignments. 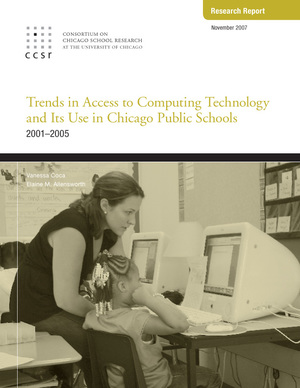 Trends in Access to Computing Technology and Its Use in Chicago Public Schools, 2001-2005