Differences in Observation and Value-Added Scores by Teacher, Student, and School Characteristics
January 2016

2. To what extent are measures of teacher effectiveness related to individual teacher characteristics? Are these relationships different for value-added and observation scores? Do teachers with more years of experience have higher value-added and/or observation scores? What about teachers with advanced degrees or National Board Certification?  Are there differences in REACH scores by teachers’ race or gender?  To what extent are any differences explained by differences in school characteristics?

The study uses data from the 2013-14 school year, which represents the first comprehensive snapshot of evaluation scores for Chicago Public School teachers under the new REACH Students teacher evaluation system. This includes value-added scores based on students’ gains on tests, as well as scores from observations of teaching practices in classrooms.

The report also finds teachers in schools with better organizational and learning climates tend to have higher value-added and observation scores, and these differences remain significant when comparing schools with similar student characteristics, including poverty level.

REACH and other teacher evaluation systems employ multiple measures to capture different aspects of teacher performance. Value-added scores are intended to capture student growth on test scores, and explicitly control for measures of student disadvantage, such as poverty and previous achievement. Observation ratings are intended to capture a teacher’s level of instructional practice, and do not control for any student or school characteristics, such as poverty.

The study also finds that, on average, Black, Latino, and other minority (i.e. Asian, Hawaiian/Pacific Islander, Native American, and multi-racial), teachers’ observation scores are lower than white teachers’ observation scores. However, for Black teachers, who are overrepresented in the highest-poverty schools, most of this difference seems to be due to the relationship between observation scores and school characteristics, such as school-level poverty. There were no significant differences by teacher race/ethnicity on either reading or math value-added scores.

Other key findings include: There are some differences in teachers' evaluation scores, depending on experience and credentials. Teachers with more experience have higher scores on value-added and observations than new teachers. Differences between teachers with National Board Certification or advanced degrees, compared to those without those credentials, were found only on observation scores, not value added.  Male teachers have lower observation and value-added scores than female teachers. On average, male teachers scored lower than female teachers on observations and slightly lower on value added than their female counterparts. 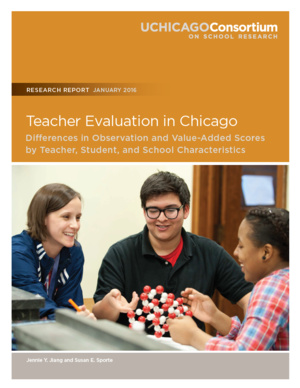 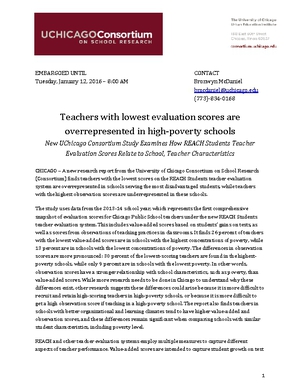 Teacher Evaluation in Chicago: Differences in Observation and Value-Added Scores by Teacher, Student, and School Characteristics