1. Can we model propensity for retention in the Chicago Public Schools and use the propensity variable as a covariate in a model that accounts for achievement patterns in the schools?

2. Using the propensity for retention variable as the basis for grouping students, what is the effect of retention on achievement gains?

Students who lag behind their classmates are sometimes retained in the same grade to give them a chance to "catch up." In 1987, the Chicago Public Schools discouraged teachers from retaining students in the same grade for another year. Using a propensity for retention measure, the authors were able to match students who were retained with those who were promoted. Promoted students show larger achievements gains (as measured by standardized tests) than those who are retained. 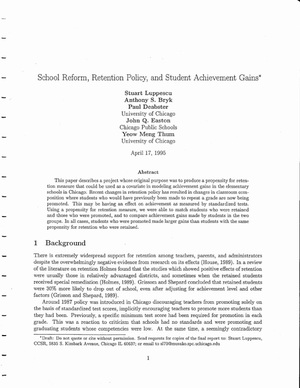