Turning Around Low-Performing Schools in Chicago

1. What types of reforms aimed at low-performing schools have occurred in Chicago, what are the levers of change in each effort, and how do these correspond with the models being promoted by the U.S. Department of Education?

2. Do the schools serve the same students after going through reform that they served prior to reform?

3. To what extent was there a change in teaching staff with the reforms? How did the new teacher workforce compare to the previous one?

4. To what extent did student outcomes change after intervention, relative to other similar schools in the district that did not go through intervention?

This report finds that four years after undergoing dramatic reform efforts such as turnaround, very low-performing elementary schools in Chicago closed the gap in test scores with the system average by almost half in reading and two-thirds in math. The improvements took time to develop; test scores were not significantly better in the first year of reform, but grew larger over time.

Our colleagues at the American Institutes for Research also released a report on this work, which is available here.

The study examined five different reform models initiated by the Chicago Public Schools (CPS) in 36 elementary and high schools identified as chronically low performing. The five reform models were: Reconstitution; School Closure and Restart; School Turnaround Specialist Program; Academy for Urban School Leadership; and Office of School Improvement. Each is consistent with one of the four improvement models recommended by the federal government (turnaround, transformation, restart, and school closure).

Changes in student populations varied across reform models. Schools that underwent these reforms and remained neighborhood schools generally served the same students, and the same types of students, as before intervention. Schools that were closed and replaced with charter or contract schools generally served more advantaged students after intervention. The teacher workforce after intervention across all models was more likely to be white, younger, and less experienced.

A section on schools closed for underutilization shows that: 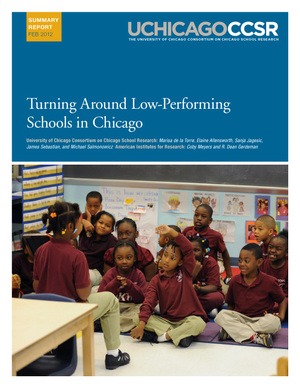 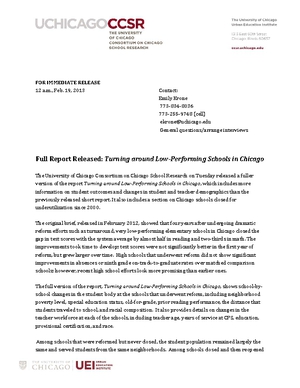 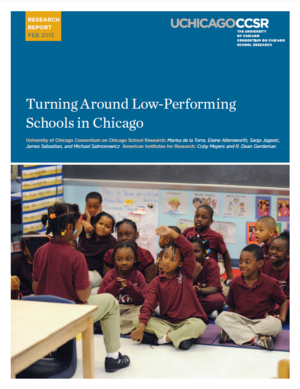 Order this publication on Amazon
Read the report on this work, from our colleagues at the American Institutes for Research