This report is the result of a formative evaluation of the 10 Success schools to provide data to inform programmatic improvements over the course of the three-year implementation.

The UChicago Consortium conducted a formative evaluation of the Success Project, designed to provide information that could inform the program's improvement as it developed. In particular, the evaluation sought to describe how the project was being implemented in the context of the 10 Success Schools, it sought to understand the program’s theory of action, as well as to provide the program with some quantitative evidence to monitor the program’s progress.

In addition to informing the program, this report offers some valuable insights and considerations for community-based organizations and other programs working in schools. 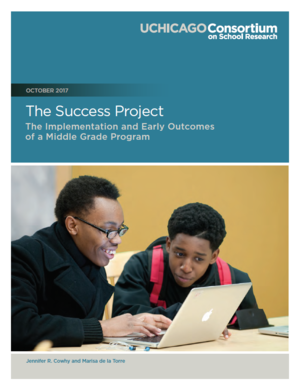 The Success Project: The Implementation and Early Outcomes of a Middle Grade Program