This report documents the origins and early history of the Chicago Annenberg Challenge. It examines the development of the Challenge's "theory of action" and assesses its place in the broader institutional contexts of Chicago and the Chicago Public Schools (CPS). The report explores how those contexts have influenced the Challenge's development and whether the Challenge, in turn, has begun to influence its environment. A key element of this report concerns the relationship of the Challenge's theory of action for school change to other dominant theories of action held by the city's civic, business, and governmental leaders.

This study examines the activities and influence of the Chicago Annenberg Challenge, founded in 1995 as part of a nationwide initiative to improve public schools. Although the Chicago Challenge began as a collaborative of community organizations, it has since evolved into an activist foundation with a distinct theory of action. While its shift in identity has helped to ensure its organizational survival, it has also posed challenges to its capacity to directly influence the process of reform in CPS. In this report, the Chicago Challenge's theory of action is explored.

The Challenge sought to build on the momentum of the 1988 Chicago School Reform Act, which had radically decentralized governance of CPS. Because they believed the model of school site control was worthy of strengthening, the Working Group proposed that schools suggest their own innovations for improving. To structure such broad expectations, the group asked schools to focus on how they might alter the basic elements of time, size, and isolation. In addition, rather than applying as individual schools, they were required to form networks—clusters of at least three like minded schools aided by an external partner—to enhance each school’s opportunities for collaboration and community support.Within the first year, the Challenge began to develop an identity as a foundation. It sought independent foundation status and appointed Ken Rolling, an experienced foundation officer, as Executive Director. These decisions clarified the Challenge’s organizational identity. In taking on the identity of a foundation, the Challenge moved away from its roots as an ad hoc, voluntary group primarily engaged in community organizing. Several key findings emerge from this historical account. The Chicago Annenberg Challenge has gone through a rapid process of organizational learning that reshaped its identity from a collaborative of community organizations, university researchers, and education reform groups into a formal foundation pursuing a strategic vision with an activist staff. External pressure from political and public school actors prompted some of this development. Internally, the Challenge staff, Board, and advisory group had developed a critique of its own practice. Ties between foundation executives and their community and university based grantees influenced the ways that the Challenge responded to these external and internal pressures.

The Challenge as a foundation is both secure and supported; however, its influence has not yet fully developed. In the process of securing its identity, the Challenge has seen its institutional resources broaden, even as its potential to evoke change in the school system has faced increasing impediments. As the Challenge’s identity has developed, its strategies to influence school reform in the city have expanded.

The Challenge’s strategic flexibility remains constrained by its early decisions and a rapidly changing institutional environment. Grant decisions made in 1995 have strongly influenced the Challenge’s direction and obligated much of its available resources. At the same time, CPS's shifting governance structure and the policy agenda of a new school system administration have changed expectations for reform in the city.

The Challenge in Its Institutional Context
To gain an understanding of the Challenge’s role amid the wide range of Chicago school reform efforts of the past decade, a sample of city leaders were asked—in the summer and fall of 1997—how they viewed the Challenge and its prospects for success. Their answers revealed a substantial lack of knowledge about the Challenge. About half of the business and government leaders would not even speculate on its goals or strategy; however, most interviewees had advice for the Challenge Board. About half of these leaders suggested broadening the focus to include influencing policy system wide, and specifically to focus on policies to enhance teacher skills and competencies.

Civic and governmental leaders’ responses also showed how the Challenge’s “theory of action” is but one of several in the city. Compared with the Challenge’s goals, the view of school change held by city’s political leaders and school system officials is more business oriented. Higher education leaders, particularly those from colleges and departments of education, typically focus on the primacy of teaching and learning in their view of school change. Community and other civic leaders fall into two groups: those who seek a broad community dialogue about ways to achieve economic and racial equity in the schools, and those whose focus is on enhancing parental and community control of the schools. The data indicate that the Challenge does not yet have a secure basis for legitimacy among many of these leaders. At the same time, the Challenge has among these leaders a wide variety of potential collaborators and sources of political support with which it shares at least some common ground. In this mix, the Challenge’s theory of action can be seen as both distinct and, given flexibility, potentially influential.

Implications
The study identifies several issues that confront the Challenge as it attempts to influence public schooling in Chicago. In order to be influential, the Challenge must distinguish its vision of school change in clear terms that permit it to have a meaningful identity in a crowded field of organizational change agents. Without such visibility, narrow influence based on “keeping the flame alive” may be the best that can be achieved.

At the same time, the Challenge must develop resource ties and cultural and political support from among the existing institutions in the city so that it develops its own locally rooted organizational legitimacy. In seeking such legitimacy, however, the Challenge risks compromising its theory of action to encompass ideas that are not in direct conflict, but that require stretching beyond current plans.

The development of the Chicago Annenberg Challenge into an activist foundation seeking to achieve policy influence while remaining faithful to its initial vision, should it succeed, may ultimately restrain its long term reform legacy to one less deep and thorough than it might have hoped. 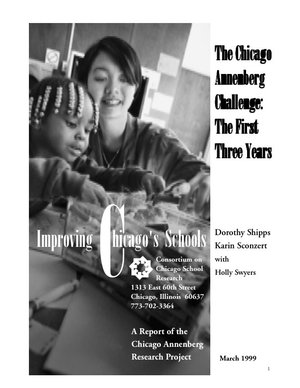